A reply to LDR NooBPlayz
0

According to what I read recently, I believe it is a class for studying optics/lenses, a branch of physics.

PG Ender 999 is completely fine (hopefully), but Ender Creeper14, or Dom, is the guy with a life-threatening diabetic issue. Though he told me right now that is becoming better, so let's pray for him.

Sorry if I made any sort of confusion. No, it's not a troll of some sort (I wouldn't do that, especially in a wiki/discord that I manage), it's actual news. It's just a health issue with someone else, not PG Ender 999.

This screenshot was sent to me by a PG3D support team member. Though this was a few days ago and he said that he is doing better, so yeah. 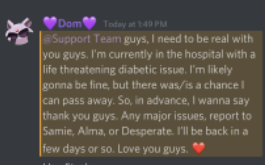 No. In fact, the recent times are probably the most active times in the course of the wiki's entire history. We had an increase in views back in 2016, then in 2017, we had a large downfall because of everything being outdated and I quit the wiki for a while, but since last year, we've been pretty active and hope to stay in this pace.

P.S. The Discussions area of this wiki is actually one of the most active on Fandom, so we're not so dead compared to the other wikis.

So, it's this? *hepi thinking intensifies*

It is completely fine for this update, because it already happened.

Also, what I would like to mention is that he was a staff member because he did good contributions. However, ever since he gained his powers, his behavior started becoming worse to the point where we had to demote him like a month ago. He got blocked for a week once, and very recently, he got blocked for a month.

P.S. Where it says "Help Us Grow the Pixel Gun Wiki", it automatically shows the 5 people who have made the most contributions in a week. Unfortunately, it can include vandals and spammers.

Imagine being a JuStLeAfY hAtEr

Hello, JustLeafy here, and today, I would like to announce that from now on, we should create pages for the new weapons once they are officially released, like after the end of the previous Battle Pass.

For this update, I'll allow the creation of these pages since it was already done and not force this policy at this time, but for the next updates, we'll just have to wait.

If the future weapons are leaked, I'd highly recommend is adding paragraphs in a more private space, like your personal Word documents, then once the weapons are officially released, you can paste them in new pages.

The only reason why I made this policy is because of the fact that the developers recommended to us to not make those pages.

Note that this policy won't be very strict. As much as it is helpful to inform people about new weapons, the people who will edit such pages won't be blocked for giving out information about the new weapons, unless if they talk back to the staff, flame them and/or constantly re-create the page.

Yeah, as much as we like to give out information about new weapons, we will have to respect the developers to reduce any weapon leakage. Thanks for reading this announcement!

It's fine if you are using an alt account if you are genuinely not trying to break the rules. It's completely understandable if you can't access your main account, so the use of this account is authorized, and thanks for letting me know. :)

Yeah, it's a problem with Fandom. I'll report it.

A reply to Great Killa OE
0

It's a bug on Fandom.

You can get the Heroic Epee if you haven't.

A reply to Midget Monday V.2
0

Sorry, I'm not blocking you.

I can remove it.

That's not me lol.